ROUND 19 MATCH REPORT – vs PORT MELBOURNE

On the cusp of seasons end, Frankston have improved in spades this year.

Despite going down to Port Melbourne by 15 points on Saturday, the Dolphins improved the deficit from the round 10 clash by 10 goals – this time on the Borough’s home deck.

Mitch McCarthy kicked off proceedings for the Dolphins before Port placed Frankston on the back foot at the first interval.

Facing a four goal buffer, the Dolphins utilised the wind and climbed back into the contest through relentless pressure.

Corey Rich and Will Fordham got the ball rolling inside two minutes with respective goals.

Goy Lok highlighted the term with an outstanding shrug and goal from the pocket, before Beau Bailey’s tackle and goal on the siren capped off a five-goal-to-two second quarter.

Against the breeze in the third it was going to be crucial for Frankston to hold off Port for their turn with the wind in the last.

With Nathan Freeman going down moments before half-time, the reliance was on the midfielders to carry a heavier workload in the second half – Will Fordham took it in his stride as he was unstoppable in the premiership quarter.

Despite not registering a major, the likes of Will Arthurson and Dylan Gordon across half back while Blake Mullane in the middle shutting down Tom O’Sullivan kept the Borough to one goal in the third term.

Facing an identical situation to last week where the Dolphins rolled over in the final term, this week it was time to show their supporters and more importantly themselves, what they learned after trailing by four goals at the final break in successive weeks.

An early goal to Port and the down pour of rain made it tough for the Dolphins to come away with the four points, but their was still time to earn some respect and demonstrate the signs of improvement.

Tom Small certainly gained the respect of many when he put his body on the line at half-forward but was unable to convert the set shot, not long after Rich kicked his 22nd major of the year and Lachie Gill-Renouf finished his strong day with a goal. 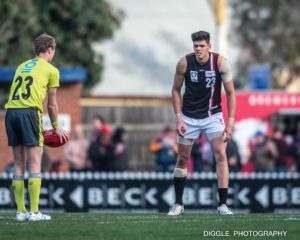 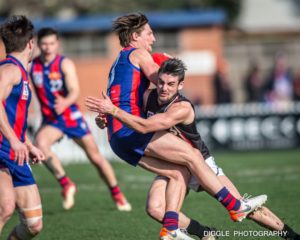 Coach Danny Ryan was happy with how his side bounced back from last week and was pleased with how they challenged one of the better sides in the competition.

“I think we were just better for longer today,” he said.

“We were disappointing last week, last week we played two and a half quarters, today we played four quarters.

“That’s the thing I’m most proud about that they gave four quarters of effort, our desire to hunt – 90 tackles, there was a lot to like,” Ryan said.

Ryan and his coaching staff have used the last six weeks to discover what they had in their list and where the gaps are for next season, a tactic that has unveiled the best in some individuals and shown Ryan what he is on the hunt for in 2020.

“We are a bit short of where we want to be which is something we knew already but we have discovered some players can play different positions and different roles,” he said.

“The development in the off season will be really important but, we will be recruiting for mature VFL bodies, we have enough soldiers who are dying for the cause, we need some more class and polish over the top.

“We have established some players in different roles, Josh Newman is an established midfielder, Robbie Turnbull and Tom Small have come in and had an impact.

“Mitch McCarthy has gone forward and been able to kick goals so there has been little wins along the way,” Ryan said.

Frankston head into their final game this week against Casey who are desperate for a win to make finals.