Frankston was close all day on Sunday afternoon at SkyBus Stadium, but never able to get on top of a more polished Richmond outfit.

After a six-minute burst late in the first quarter where Richmond got the centre clearance ascendancy to score four unanswered goals, Frankston was unable to regain the lead, going down 15.9 99 to 12.11 83.

Tylar Young, reinvented as a defender in recent games, streamed through the centre to give Frankston the perfect start, kicking a goal on the run from 55 in the first minute of the game.

The Dolphins had plenty of opportunities early but Josh Stern was the only other Dolphins goal scorer of the quarter as they failed to capitalise on their territory and shots at goal. Brodie McLaughlin was a prominent presence up forward all day, playing above his height to halve and win contests.

As Richmond threatened to put the game beyond reach, McLaughlin soccered off the ground to kick his first goal after three behinds in the first quarter.

He then won a holding the ball free kick soon after, which allowed Josh Begley to take the advantage and kick a goal which got Frankston within 12 late in the second quarter.

But late goals to Richmond in the second and third quarter hurt Frankston.

Richmond’s AFL-listed midfielders stood up from the get-go; Patrick Naish, Will Martyn and Riley Collier-Dawkins were all influential and slick out of the centre, but Josh Newman (30 disposals, eight tackles) worked hard to turn the tide the other way in his 100th game. 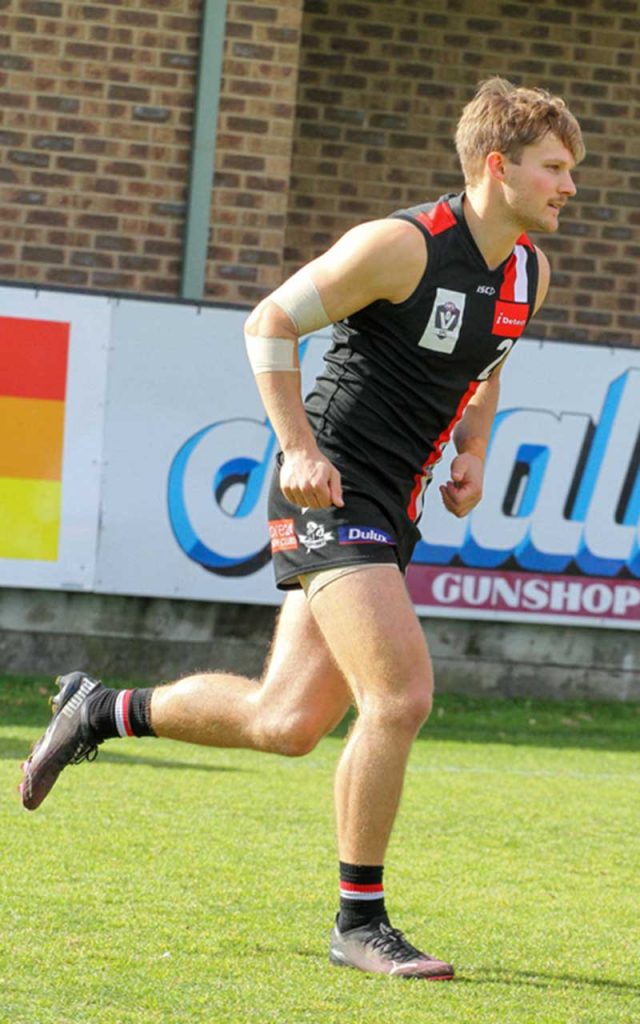 Anthony Brolic (26 disposals) was inserted into the midfield to kerb the Tigers’ dominance and played his part as Frankston looked to reel back the lead in the second half.

McLaughlin continued presenting, kicking two goals in the third quarter, with Frankston getting the ball into their forwards well in the middle part of the game as they lowered their eyes and hit targets through the centre square.

Within eight points at three-quarter time, Jack Mentha and Begley got themselves involved as the game progressed and loomed large in the last quarter, but Richmond’s on-ball brigade, well-fed by ruckman Samson Ryan, ensured there would be no such comeback.

Naish and Ryan kicked the first two of the last quarter, with the Dolphins never looking likely thereafter despite five late goals, including two to livewire Mentha.

Stern was a standout in attack for Frankston all day, with his disposal opening up dangerous play and scoring chains on multiple occasions, while big-bodied midfielder Billy MacKay also showed positive signs around the ball.

In further negative news, Bailey Lambert limped off in the second quarter with what appeared to be a major ankle injury, while wingman Jackson Voss also appeared to injure himself but played out the game.