He orchestrated their rise from 9th in a 12 team MPNFL Division 2 competition in 2016, to premiers in 2018, lifting the Tigers to Division One where they would win the flag in 2019, his final year.

He won five best and fairests for Dromana, one MPNFL best and fairest was named four times in the MPNFL team of the year, and was involved in three premierships, including two as coach.

Away from the footy field, he works as a “youth development coach” and has an elite sports background having been listed with the Detroit Tigers and Colorado Rockies as a professional baseballer, for seven seasons, from the age of 16.

After impressing since arriving at Frankston in the preseason, both senior coach Danny Ryan and captain Josh Newman have endorsed Johnston as a future senior VFL coach. 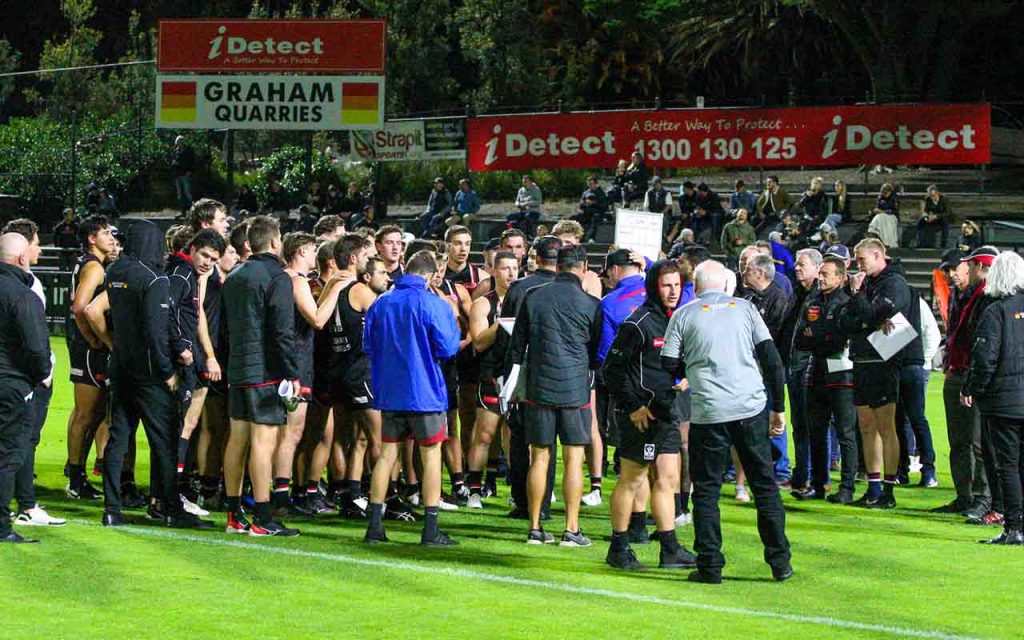 When Johnston talks, the players listen.

“The way he conveys his message has built a lot of respect from the players,” he said.

“He doesn’t over-communicate so when he talks, everyone listens. What he’s got to say has been really valuable for us boys.

“And he has come in and had more and more impact the more responsibility DR has given him throughout the year.

Newman believes his recent retirement heightens his credibility as it provides him with an understanding of the mentality of the modern footballer.

“He understands the lows and the highs we go through, and he’s really sensitive to that.”

“He can identify when blokes need an arm around them and guys who might need to be pulled aside to have a chat.”

Johnston agrees that he speaks to players from a player’s perspective.

“I’ve been there and experienced it all, even in the twilight of my career,” Johnston said.

“That’s something I can see in players and we can have honest conversations about how to overcome those difficulties.

“I do talk to them like I am a player. That’s the excitement I have coaching these guys – I feel like I’m on the journey with them!

“That is that understanding that I’m fresh out of the game and I’ve had the best of both worlds that I’ve played and coached at the same time.”

His exposure to high-level sport gives Johnston an appreciation for the standards required in a successful club.

“Learning how to do things correctly and having high standards in the way we prepared and looked after ourselves has translated,” Johnston said.

“That’s something I value highly so that’s one of the staples we brought into Dromana and not letting anyone drop below that bar so that you attract people who have those high standards and that’s what we want to set up down at Frankston.

“Understanding the correlation between how we train and prepare and how we play and it’s a difficult thing to understand as a young player.

“Saturday is the reward for what you’ve done during the week.

“You should then be able to eyeball your opponent and know you’re as prepared and fit as you can be so you can confidently execute what you need to do.”

That he won four ‘players’ player’ awards for Dromana further illustrates his discipline.

That dedication in his leadership at Dromana saw the Tigers winning the most disciplined MPNFL club in 2016, and he draws parallels between the list demographic at Dromana that year, the beginning of their ascent, and Frankston’s in 2021.

There was prodigious young talent in the seniors after Dromana won the under 19’s 2015 premiership – 10 players from that side would play in the 2018 premiership, complemented by seasoned men Beau Cosson, Shaun Clarke, Ethan Johnstone, Dan Geurts, Terry Wheeler, and Johnston.

He has also been a great source of support for the skipper, who has sought advice on multiple occasions about keeping the squad grounded, during a fast start to the season.

“I’m still learning and navigating my leadership and it’s been different this year because we’re winning,” Newman said.

“I’ve got to keep blokes on the right path and not get ahead of themselves.

“I’ve gone to Rikki a few times and asked ‘where do you draw the line between being excited and wanting to celebrate a good win, and knowing that we still haven’t achieved what we want to achieve?’

Johnston has been a handy resource for Newman, given the defensive coach has been on the journey toward success at Dromana, learning the virtue of patience.

“He’s been really good in painting the picture of the standards we want to set for the boys and how to communicate it,” Newman said.

“Rather than telling young men what to do and when to do it, using them to write their own standards and hold themselves accountable.”

Johnston has tried to instill the notion that the best fun the players can get from footy is through premierships, which is born through hard work.

“Some players fight the discipline and the structure for a period of time, then they work out it is enjoyable to be part of because it translates to success and success is the ultimate fun.

“Once you get a taste of that, you prepare to do whatever you can to get there.

“I’m young enough to connect and my story’s believable in that I’d ask every player to do what I’d be prepared to do myself.”

“He’s got a really good understanding of when to be intense and when to have fun and that’s a rare thing,” Ryan said.

“We’re under such fierce, competitive pressure, and they can burn relationships, so someone who’s got the blend is really valuable, so I really rate him.

“He’s a star and hopefully is one day the next coach of this footy club.” 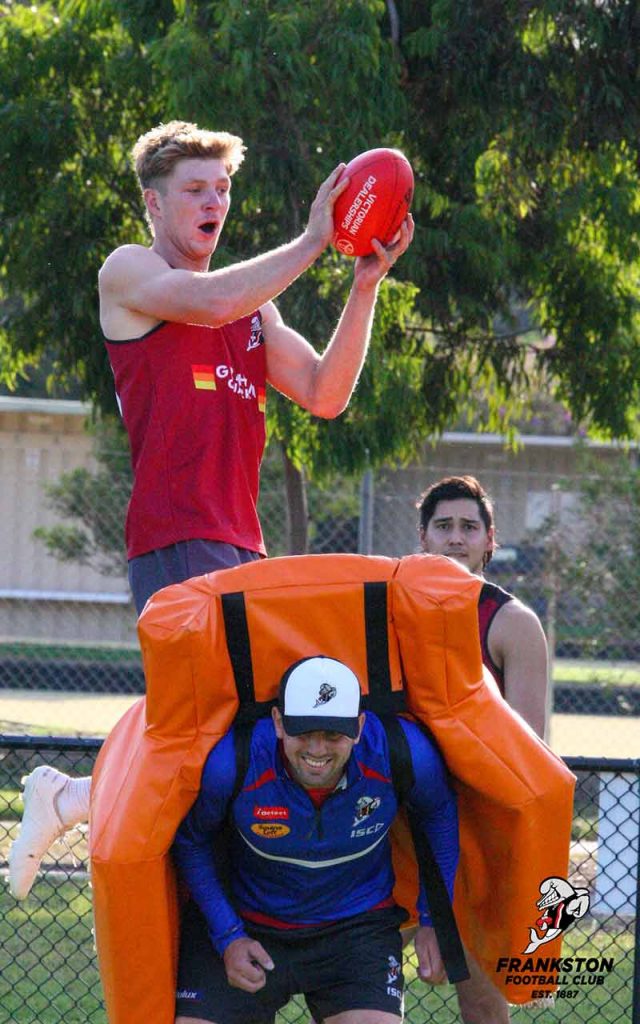 “He creates that separation between understanding his role as a coach and also building healthy relationships with players.

“He’s worked really hard with building those relationships early, that now he’s at a stage with his coaching that he can have those hard conversations and knowing that the players know he has their back.

“I couldn’t say any of our players don’t respect him because all of the players really take on board what he’s got to say.

“He’d done an amazing job within the MPNFL and shown he was ready to go to a higher level and I could see him developing even further.”

“He’s definitely got the potential to be a senior VFL coach and even go the next level.”

Johnston has prioritised “building a rapport” with players since arriving at the Dolphins, believing it to be a necessary foundation ingredient for players to emotionally invest in a successful culture.

“My strong suit is being able to connect with people and understanding all walks of life and that’s from everything I do in my working life and also in a lifetime of being involved in team sports.

“So being able to motivate people in different ways and knowing different people function differently.

“That probably overrides the technical stuff because if you can connect with players and they trust your messaging and care for them, they’re much more likely to give you everything they’ve got.

“My learnings from my program at Dromana was that it was more about building a program where players love coming down and playing.

“Part of my DNA is enjoying working with people and trying to get the best out of them.”

His investment in developing relationships with players is a result of his work outside of footy as a “youth development coach” at Brotherhood of St. Laurence.

He helps people aged 15-24 years old on the Mornington Peninsula with employment and study pathways.

“As I got older I’ve developed an understanding about how I can have an impact on the community in a positive way. They’re not always people from conventional backgrounds so the doors for them don’t open as easily as they do for others.”

Johnston calls himself a ‘footy nerd.’

A keen Richmond Tigers supporter, he speaks with intrigue about player development, recruitment, and the AFL draft, goes to local matches to absorb different coaching styles, and listens to different podcasts.

In particular, the Herald Sun ‘Sacked’ podcast has enriched his understanding of coaching and leadership within the sport.

“I’ve always had a keen interest in leadership and upskilling where I can,” he said.

“Learning doesn’t ever stop. I’ve been lucky to be exposed to leadership after 14 games of senior footy.

Johnston has enjoyed the step up to VFL level this season and is not sure what the future holds.

“It was the great unknown about where your skill set fits in and having to be confident in your own skin to have conviction in your messaging.

“What I’ve learned this year is that it’s all the same game.

“It’s a lot more technically advanced but the crux of coaching in terms of connecting with people is similar.

“Coaching in a lot of ways is pinching ideas from others and finding stuff that resonates with yourself and bottling that up in your own style. You never stop learning, the game’s always evolving.

“I’m not sure what the endgame is in coaching but anything footy related, I’ve got a keen interest in.”

Getting Johnston to the Club Frankston have been trying to get Johnston across the line for a few years.

Initially, he was determined to finish the story he started at Dromana.

After retiring in 2019, he had a road trip around Australia slated for 2020 with his wife and four kids.

While that was heavily truncated due to the pandemic, it is the reason he was not part of the panel last year.

Ryan again got in contact ahead of the 2021 season; after a few weeks of consideration, Johnston was affirmative.

Ryan was attracted to Johnston when listening to some of his coaching addresses at the MPNFL and was buoyed that he was “switched on to the modern game”.

“He was specific about the instruction his players were getting and he got good results accordingly.”

When Johnston was asked why he chose to come to Frankston, he said: “I could see that there had been a dramatic change in the way people were starting to view Frankston from the outside looking in.

“It’s a lot more of a professional club now. The club’s doing the little things better and that feeling from the outside looking in is huge.

“If I can be a little part of changing the perception from local footy and so people realise this is a viable option to a) come and watch the footy and b) for young players to come and play.

“I want to be part of something special.

“I think this could be a really good story to turn this around and make this a winning club.”