“We are playing football this year until someone tells me we’re not:” Danny Ryan’s message to players

“We are playing football this year until someone tells me we’re not!”

That has been Frankston senior coach Danny Ryan’s strong message to his squad throughout isolation.

The pandemic has changed the way the Dolphins train and interact, but the hard work and communication hasn’t stopped, with the club desperate for the season to begin.

Since the practice match against the Northern Blues on March 12, Frankston have had just one week off training, Ryan lauding their fitness and motivation.

“Talking to the leadership group and any of the other players, we’ve gauged the temperature for what their appetite was, and every single player we spoke to said ‘as soon as restrictions are lifted, we want to come back!’ Ryan commented.

“I was getting text messages from players saying restrictions had lifted before I’d even read it, so they’ve been the ones driving wanting to come back.

“They’ve had a strong fitness program which, to their credit, they’ve continued to do because that would be tough when you’ve got the uncertainty hanging over your head, but until someone tells me we’re not playing, we are playing!

That attitude has proven a positive one for the Dolphins following yesterday’s confirmation of the shortened seven game season starting on August 1.

A fixture, which will include a split-round, will be released in the coming weeks.

Players returned to SkyBus Stadium on June 2nd, albeit in a modified sense, having previously been constrained to training with a partner, and then in groups of ten.

And it was the joyous vibe which was most telling.

As with any football club, the Dolphins pride their camaraderie- especially given the young demographic of their list, and volume of players who played junior footy together- which was underscored by their tightness during isolation.

“Good Dolphins do good things- so a good thing is to ring your buddy and stay connected, ask him what he’s doing, how he’s going and the more of us that can do that the more connected we stay, which we’ve done well,” Ryan said.

“In essence, the whole COVID crisis has brought to the fore that… footy and sport in general, and the fabric of it is nothing to do with premierships and best-and-fairests and winning trophies and medals.

“So the atmosphere has been really good, the banter’s back, the smiles are back so it’s been awesome.” 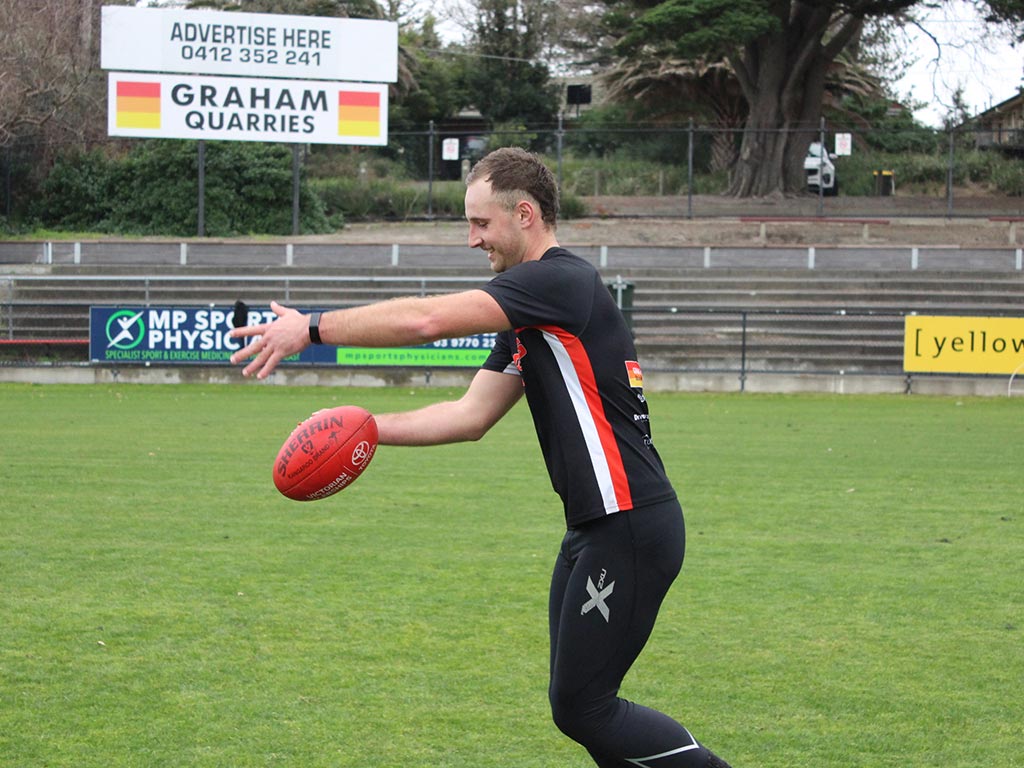 Frankston opted against having the two groups of twenty to train at the same time, on opposite halves of the oval for the first five sessions, the groups instead training thirty minutes apart to give coaches more choice and space in training drills.

However, last Saturday saw the oval split in half and allowed players from different groups to (distantly) see each other, and some ‘loud, distant sledging’ between the two groups, another step towards the (new) normality.

“It’s really modified training, the non-contact is the biggest piece of it, and every drill you do has an offensive and defensive side to it.

“So in defence, you’re manufacturing ways to put them under pressure when they’re making decisions.

“Decision making’s really important but we can’t actually put real physical pressure on because it’s non-contact, so when the defenders come forward to defend, they’ve got to pull up a couple of metres short.”

“We’re trying to be as organised as we can to not get it wrong, but it’s definitely a challenge because it’s quite unnatural, but we’ll put up with the un-natural-ness just for the ability to get together.

“The other part is you can’t do full ground drills where you go from defensive fifty into forward fifty so that’s still missing.”

Full-contact training will be allowed from July 13.