In Round 2, the Dolphins took on the Greater Western Sydney Giants in Frankston on Saturday night, which was the second consecutive game played under the lights.

For both teams, the first quarter got off to a slow start, with four stoppages inside Frankston’s 50-metre arc in the first two minutes of the game.

The interstate side never really gave Frankston a chance in the first quarter, snatching consecutive interceptions as soon as the Dolphins entered their forward 50.

Will Walker’s quick pick up out of a contest and snap on goal was outstanding, and it set the tone for a quarter in which Frankston dominated the play.

Trent Mynott quickly joined the party with a snap that was very similar to the previous one.

The Dolphins targeted newcomer Josh Butland inside 50 line many times, but Butland was unable to capitalise on the opportunities. Three marks and three tackles were recorded by the deep lying forward.

Ned Shannon, a former Crib Point standout and Dolphins debutant, had a high-intensity game, recording 11 tackles for the Dolphins. With a match high 97 tackles, it is something the boys can be quite proud of.

Frankston kicked the same amount as GWS in the first quarter, 2.3.15, to get the second quarter off to a solid start.

Surprisingly, GWS kicked the same amount as Frankston did in the first, a total of 0.0.0 points.

Blake O’Leary scored the first goal of the second half, squeezing his way through a horde of players to score at the Beauty Park end.

Starting from this point on, GWS began to pull away, striking four goals in a row to conclude the quarter with a 21-point lead.

GWS scored the first two goals of the fourth quarter, and by that point, the damage had already been done.

Will Walker added a second goal late in the fourth quarter to raise his season total to four.

For those who couldn’t make it to the game on Saturday, a complete replay of the game may be viewed online here.

On Sunday, the 10th, the Dolphins will take on Essendon at The Hangar at 12:35PM. 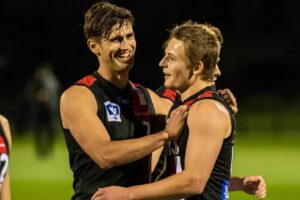