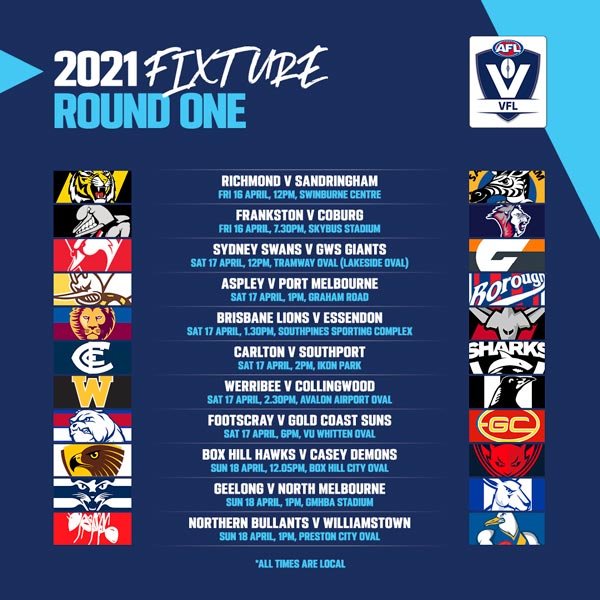 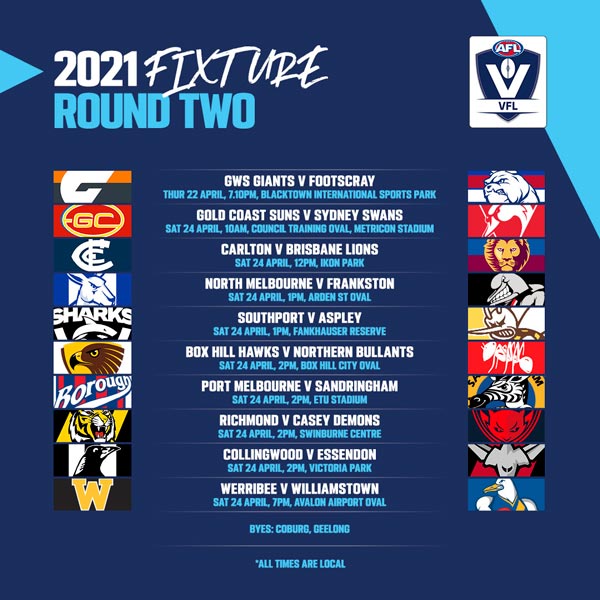 The AFL has today released Rounds One and Two of the 2021 VFL Premiership Season, which will see the largest second-tier football competition in Australia return to Victoria, NSW, and Queensland after a COVID-19 affected 2020 campaign.

The home-and-away season will feature 22 clubs from Queensland, New South Wales and Victoria in a 16-game season across 19 rounds. The season will start on Friday April 16 under lights at Skybus Stadium when Frankston hosts Coburg.

For the first time, six clubs from New South Wales and Queensland will join the oldest state league football competition in Australia. The AFL also welcomes back the Northern Bullants – one of the League’s oldest teams as a stand-alone club in 2021, the first time since 2002.

AFL Head of Talent Pathways and State Leagues Tristan Salter said the release of the fixture provides great excitement for a VFL football-starved community of fans across Victoria, New South Wales and Queensland.

“We are so excited that footy is back. Although we have to be vigilant, aware and responsible throughout the season, we cannot overstate the excitement of every body connected to the VFL about the return in April,” Mr Salter said.

“Last year was devastating to everyone connected to community football. The AFL is very proud of how all VFL clubs, players, officials, supporters and corporate partners managed through a difficult year and kept their communities connected.”

“All 22 clubs play a vital role in keeping their suburban and regional networks engaged. They are pillars of their local communities and so important to growing and nurturing our national code.”

Mr Salter said it was an extraordinary achievement “that 12 months after the competition was suspended due to lockdown, the competition returns with renewed vigour. We look forward to a new era for VFL football with new teams, new players and football played across three states in a new and exciting format. The start of the footy season is a testament to the hard work of all involved.”

Round One will kick-off when old rivalries Frankston hosts Coburg under lights at Skybus Stadium in Frankston. Sydney and GWS GIANTS will face off at Lakeside Oval ahead of the Sydney Derby at the SCG on Saturday April 17. Port Melbourne will travel to Brisbane to play Aspley while Carlton plays Southport at IKON Park.

A blockbuster Sunday will conclude Round One with the return of the Northern Bullants when it hosts Williamstown at Preston City Oval, Box Hill hosting Casey Demons and North Melbourne travelling down the highway to face Geelong at GMHBA as a double-header into the AFL match.

This year’s fixture closely aligns with AFL programs given the VFL involvement of AFL-listed players from 14 AFL clubs and the shared resources across all 14 AFL clubs. The release of rounds one and two aligns with the current release of the 2021 Toyota AFL Premiership Season fixture and is central to the fixturing of the season.

All clubs will have three allocated byes to provide an added level of flexibility.

The fixture will deliver fans a blockbuster schedule of matches and allow maximised broadcast of the game with the VFL to enter the homes of more fans across more channels in 2021.

The Anzac Day weekend of football in Round Two will see the first Thursday night game of the season when Footscray Bulldogs travel to Sydney to play GWS GIANTS under lights at Blacktown International Sports Park. Thursday night matches will be a regular part of the VFL fixture in 2021 with games to be broadcast live for footy fans across the country.

Traditional Anzac Day rivals Essendon and Collingwood will face off at Victoria Park on the eve of the AFL clash. Richmond meets Casey Demons at the Swinburne Centre ahead of the AFL blockbuster Anzac Day eve match at the MCG.

The 2019 Grand Final rematch between Richmond and Williamstown will be played in Round 10.

Rounds three to 19 dates, times and venues will be announced following the release of additional rounds of the 2021 Toyota AFL Premiership Season fixture.

The AFL would like to acknowledge the support of all clubs in demonstrating the resilience and flexibility to adapt where needed to get footy started.

“We begin a new era for the VFL in 2021 with a renewed level of optimism and excitement, focusing on delivering fans the highest standard of state league football in Australia,” Mr Salter said.

“The introduction of six clubs from the northern states will not only provide more opportunity for players to potentially realise their AFL dreams, but also improve the standard of footy for the legions of passionate fans and their local VFL club.”

“All 22 clubs have been pillars in state league football and this season will provide all clubs, players, coaches, officials, members and supporters the best opportunity to flourish again after a challenging year in 2020,” Salter said.

“We know the legion of supporters are looking forward to the return of the VFL season and there is much for fans to look forward to, whether that be attending matches or watching the broadcast.”

A top eight finals structure will commence on Saturday August 28 with the VFL Grand Final to be held on the weekend of September 18/19. The AFL will continue to work through double-headers with VFLW and AFL matches.

All clubs have connections to community clubs and pathway programs, including a varied alignment to Under-19 NAB League Clubs for Victorian-based teams and state league programs for New South Wales and Queensland-based teams. Talent from pathway programs including the NAB League will be given the opportunity to play with VFL clubs to provide aspiring AFL talent the experience of senior football.

“The challenges surrounding the ongoing pandemic requires the VFL to remain diligent and take every precaution to ensure the health and well-being of everyone continues to be the key priority,” Mr Salter said.

“Scheduling the fixture in blocks provides an added level of flexibility to adjust where required, and our clubs and industry have the resilience and open-mindness to adapt where needed to keep footy going for the fans.”

The AFL welcomes recent announcements from the Victorian State Government surrounding funding to help Victorian VFL clubs recover from the impact of COVID-19 and changes to its COVID-19 Public Events Framework which affect crowd restrictions for community football. The one-off assistance package for VFL clubs will strengthen Victoria’s AFL development pathways and support the COVID-Safe response of VFL Clubs for the 2021 VFL season. The changes to the Public Events Framework will allow for big crowds to return to the VFL in Victoria and return as close as possible to ‘back to normal’ when the season starts on April 16.

“On behalf of our VFL standalone and AFL aligned clubs in Victoria, we thank the Victorian State Government and Minister for Tourism, Sport and Major Events Martin Pakula for ensuring the legacy of these clubs continues to play an important part in the Australian football landscape,” Mr Salter said.

The AFL will continue to review all arrangements ahead of Round One in consultation with clubs, the various State Governments and respective Health Officers to ensure the health and safety of everyone involved in this competition remains the priority.

The timeslots for the next block of matches will be released once the 2021 Toyota AFL Premiership Season fixture for round seven is confirmed.