ROUND 17 MATCH REPORT – vs WERRIBEE

Moments of frenetic pressure and quick ball movement were compounded, and ultimately overshadowed by skill errors and lapses in concentration against Werribee on Saturday.

A Jimmy Rendell smother and ensuing forward half pressure gave Corey Rich an easy early goal, typifying the pressure the Dolphins bring when at their best. However, that was eclipsed by over-possession and in-match fade outs.

After a tight first quarter, Werribee kicked seven goals to one in the second stanza. A six goal burst out of the first break particularly exemplified their outside running and connection inside 50, a key factor all day.

It was all too easy for the Tigers in that period with the footy almost exclusively in Werribee’s forward half as the Dolphins struggled to even get their hands on the sherrin.

Dylan Gordon was tireless in defence, reading the ball well in the air and typically reliable one out but try as he- and his team-mates- might, Frankston struggled for any rebound.

They entered the main break 41 points adrift with barely a flicker of life but it could have been worse if not for an opportune checkside from small forward Corey Rich.

Small forwards Rich (3 goals) and Mitch Cox (3 goals) were ever potent around goal but suffered from a lack of supply as the game wore on, the Dolphins only managing 35 inside 50s. Mullane also chipped in with a late two-goal cameo when tried in attack.

To add to the Dolphins woes, Lachie Williams was ruled out at quarter time after an enormous body and head clash left him groggy and sore.

There were some positive signs in the third quarter, with Nathan Freeman lifting to try to will his team over the line.

After blowing the cobwebs out in his return game, Freeman found himself in good positions collecting 12 disposals in the third quarter alone (31 overall) and an important goal from fifty as Frankston looked to peel back the lead.

Cox kicked a goal either side of Freeman, both courtesy of fast ball movement to keep the Tigers defence accountable.

His third goal- the Dolphins third of the third quarter- was particularly telling. After a big contested mark on the wing, ruckman Mitch McCarthy launched it forward to Aloysio Ferreira-Neto, with the ball eventually ending up in Alex Harnett’s hands who hit Mitch Cox on the lead.

He converted his third of the day to get Frankston back within 25 points, before two late Werribee goals against the run of play. This saw them take what would be an insurmountable lead into three quarter time, eventually run away victors 16.13 109 to 9.5 59 at Avalon Airport Oval.

Midfielders Angus Styles and Alfie Jarnestrom both had arguably their best match of their respective seasons. Styles was composed in the contest, particularly influential in the first half, while Jarnestrom made good decisions to finish with a career high 25 disposals.

The purple patch continued for McCarthy, his aerial presence in a contest almost as influential as the 39 hit-outs he won (+20 hitouts on his direct opponent). The 23 year-old was pragmatic post-game when speaking about the team.

‘We looked extremely promising in patches but we couldn’t ever link those patches up,’ McCarthy told Frankston Dolphins Media after the match.

‘Our ball movement was fantastic out of half-back but we struggled to connect with our forwards and finish our work. Our set shot conversion was much better though.’

‘It’s good that each week we’re showing promise, but our biggest task is to put it together for a whole game.’

We play at home this Sunday vs Footscray in the ‘TOWARDS ZERO” VFL Round.  Come to watch the game and stay for the AFL televised round Footscray vs Brisbane Lions from the GABBA at 4.40pm! 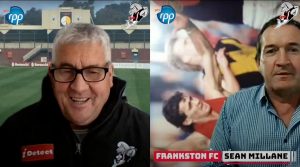 SEAN MILLANE IS BESIDE THE BAR BROUGHT TO YOU BY IDETECT